Whiskey is delicate. First of all, is it spelled whiskey or whiskey? Although it usually comes down to region, it’s whiskey in America. Then there is the command. Water, rocks or pure? It depends on your palette. Finally, there is the way whiskey is made. Some prefer peated Scotch, others rye, and then there are those who care more about the distillation process.

Regardless of region, grain or distillation, most drinkers can agree: when it comes to whisky, variety is the spice of life. And we’ve rounded several bars to give you that extra kick.

It’s hard to imagine a fine cigar in a stately chair without a decent drink. Fortunately, the entire southern wall of Winston cigar bar is adorned with dozens of well-organized spirits on well-lit shelves. There is an overly generous selection of whisky, bourbon and single malt scotches. Think of a brand. It’s probably there. And there’s a more than helpful bartender if you need some advice.

The Gladly brings class and elegance to your whiskey experience.

Famous for their original chopped salad, The Willing is an upscale, modern option for food lovers and whiskey connoisseurs. Their whiskey list has hundreds of options separated by region and style. It’s almost overwhelming, but if you know what you like, it’s easy to find variations on your favorite style. If you don’t know what you like, The Gladly offers the perfect opportunity to explore the myriad of options available around the world. National, Irish, Scottish, Canadian and Asian whiskeys abound.

Formerly known as The Turf (another Irish city center pub), Bedrooms has long been a staple of downtown Phoenix pubs. A wide selection of whiskey and several big-screen TVs make this a great place to mix some quality spirits with any game. But a bigger draw is the cozy but urban patio. If your perfect night out involves sports and bourbon, then Chambers is your kind of bar. 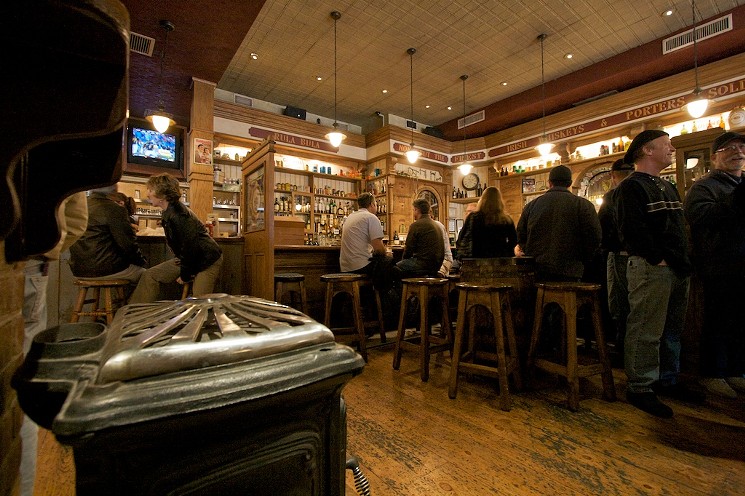 At Rula Bula bar is a real slice of Irish heaven. Built to look like a tack room from centuries past, the bar transports you straight to the Emerald Isle as soon as you step through its colorful facade. The whiskeys are plentiful and the environment playful at this Mill Avenue staple. As well as a wide range of spirits, Rula Bula also offers hearty meals, live music and pub trivia.

Formerly known as Kazimierz Wine Bar, Kazimierz reopened in 2019 with a new atmosphere and a new whiskey programme. Customers can store their premium whiskey in lockers and choose from over 500 whiskeys from around the world. Open until 1am most nights, this whiskey bar is the perfect stopover for urban night owls. 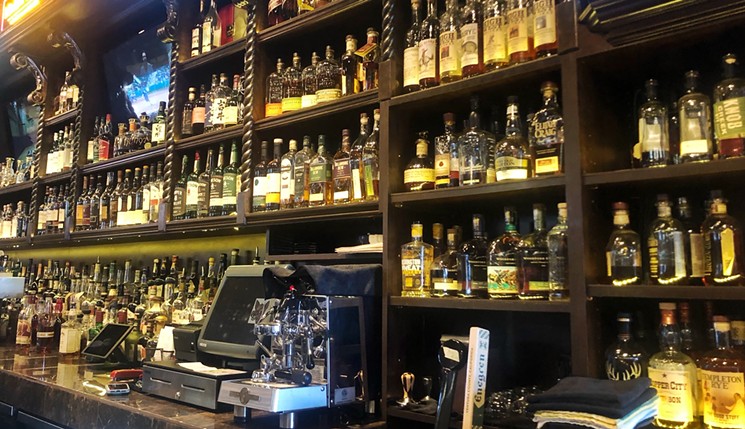 Fox Cigar Bar is far from short on whisky.

The smell of cigars is heavy and the walls are lined with bottle after bottle of brown liquor. Customers browse through goods in a glassed-in room. welcome to Fox cigar bar, a place to sit back, relax, and sink into creature comforts. The atmosphere is as versatile as its whiskey list, with people from all walks of life mingling in the spacious bar. Each location offers hundreds of whiskeys and scotches to choose from.

The old norm for any whiskey drinker worth their salt is at Seamus McCaffrey. Located in the heart of the city centre, Seamus has been serving customers since 1991. While the Winchester of Shaun of the Dead had an American counterpart filled to the gills with whiskey…well, that’s that bar. The menu features “Arizona’s largest selection of whiskey,” and based on the endless options, it just might fit the bill. 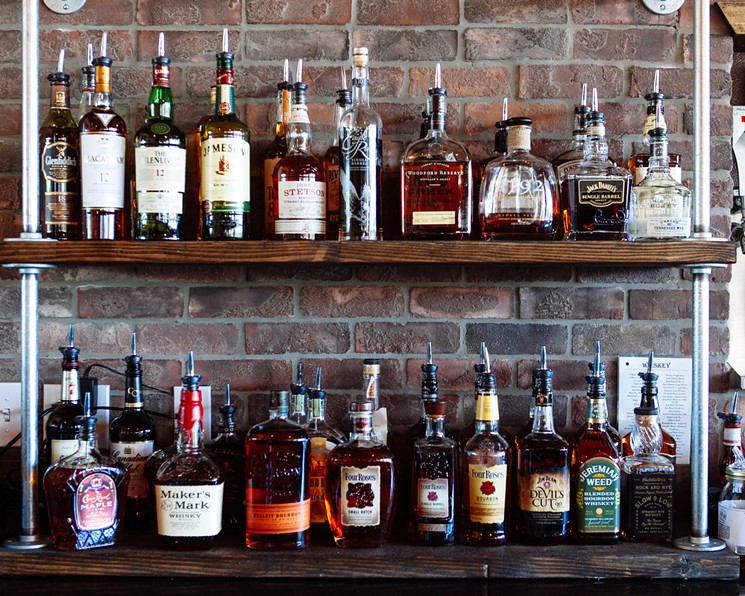 Tedder is a larger operation, but it’s still a cozy family restaurant with a home-from-home feel. The food is locally sourced but the whiskey is brought from everywhere. If you really want to get involved, show up on Whiskey Wednesday when they release brands like Templeton Rye, Blanton’s Bourbon and Buffalo Trace Distillery. They also have a long gluten free menu. And while whiskey is inherently gluten-free, technically all of these bars and restaurants offer a gluten-free menu.

Chic, rustic and perfect for a dinner party, blue dog has phenomenal food and an atmosphere to match. Their cocktail list features several delicious seasonal whiskey cocktails and their list of dark liquors is extensive. Whiskey aficionados should try the bourbon flights here, or three 1-ounce pours ranging from $25 to $225. For lovers of whiskey cocktails, order the Blue Hound Signature Old Fashioned or signature drinks like The Machinist. 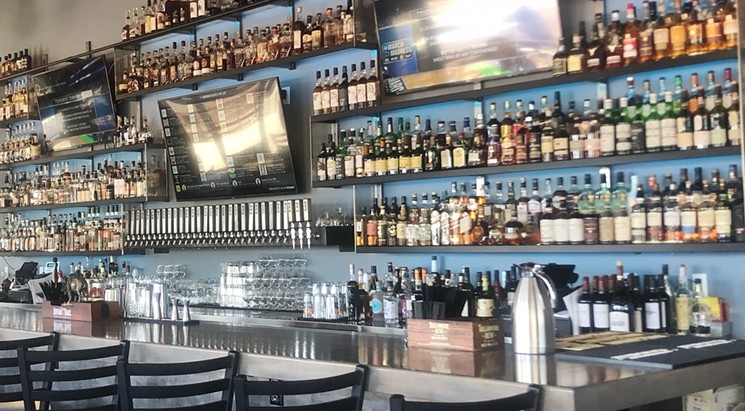 Hundred North is bright, fun and full of options.

Hundreds of bars and northern cuisine

This airy bar is just south of the main thoroughfare in downtown Gilbert. The environment at hundred north is super laid-back, with a wide-open floor plan, 30 beer taps, and a whiskey list that’s literally the thickness of a novel. Rare whiskeys are rotated through the list, and once they’re gone, they’re gone forever. The options are almost overwhelming, but if you have a strong will and a high tolerance, you’re in for a hell of a ride.

The North Phoenix Lounge is unmistakably a cigar bar, based on aroma alone. However, the 450 square foot humidor makes it bearable. Either way, the whiskey list, which reads like a book, is killer. Magnum’s a dimly lit bar offers hundreds of whiskeys that require careful ordering, as well as craft cocktails like the Fancy Monkey – Monkey Shoulder Scotch, Honey, and Walnut Bitters. 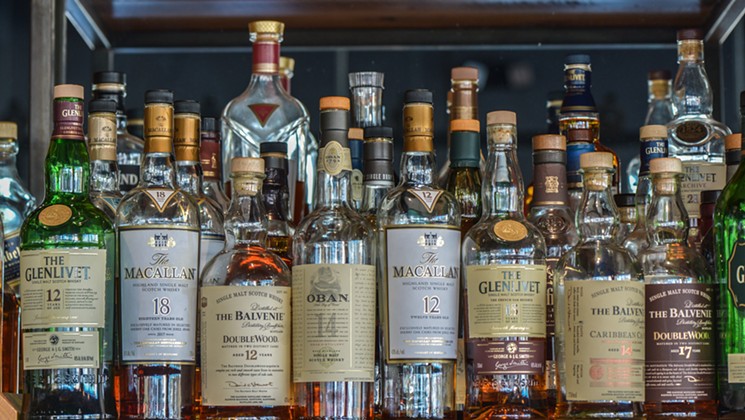 It’s right there in the name. Bourbon & Bone offers one of the largest selections of bourbons and whiskeys in Arizona. The bourbon and whiskey menu alone is three pages long, while a separate menu lists in-house reserve whiskey and whiskey flights available (ranging from a $21 sample house whiskey to a $975 flight simply called Unicorn). The upscale steakhouse also offers BNB House Manhattan if you’re not into the straight stuff.

Gray Hen Rx, one of three Barter and Shake Hospitality concepts in the Century Grand building, is inspired by 19th-century New Orleans apothecaries. Over 500 bottles of whiskey await you at what was once just The Gray Hen, which doubles as a liquor store. Sip neat bourbons and whiskeys from the curated menu or try something from the New Orleans-inspired cocktail menu.

Located at 2637 SE Hawthorne next to Coava Coffee, Cared for is a brand new whiskey bar with a decor worthy of the neighborhood. From Schlomo, the stuffed deer wearing a yarmulke, to a wall decorated with hand-painted portraits of women with real fake mustaches stuck to their philtrums, there’s plenty to see inside. But […]

The Village on the Parkway in Addison has hosted an old neighborhood favorite, Mercy Wine Bar. Now the location appears to have a suitable new tenant. District, a San Francisco export that aims for a cozy feel with globally-inspired cuisine, offers an extensive wine and whiskey program at the bar – music to the ears […]