As pandemic guidelines change just ahead of St. Patrick’s Day festivities, many, myself included, are still pondering what the future of major occasions looks like. I’ve never been one to enjoy crowded events, but I do like an Irish whiskey and a pint of Guinness. This month’s cocktail hour is for those, like me, who will celebrate quietly without crowds.

The Hermit is a simple old fashioned with Irish whiskey, bitters and syrup. The whiskey behind the cocktail is Glendalough Pot Still, and that’s the inspiration for the name. The masked figure of Saint Kevin adorns the bottle label. Every time I see Saint-Kevin, I think of the “hooded man” card from my Wildwood tarot deck.

The Hooded Man, better known as the Hermit in the Major Arcana, stands cloaked with a staff and a lantern before a mighty oak tree in the snowy landscape. Saint Kevin founded a monastery in the Wicklow Mountains in Ireland, as a hermit. This particular tarot card shows the need to withdraw within oneself for introspection and the answers one seeks.

Saint Kevin lived as a hermit and was close to nature. The pandemic has made me a hermit, and without physically being a bartender for a few years, I seem to have lost my way. I had the ingredients for this cocktail in mind, but I kept thinking I needed to add more. However, it occurred to me that an Old Fashioned really is that simple.

Other than the Glendalough whiskey, I wanted to keep the cocktail close to nature like St. Kevin was. I chose two brands of bitters, Bennett Bitters and Portland Bitters Project. Portland Bitters Project Woodland Bitters are made with Douglas fir tips. I don’t find it too piney, but it gives the aromatic profile of wide open spaces. Bennett Exorcism Bitters are made with plants used in medieval exorcisms and spiritual ceremonies. They add an extra salty note and a sweet spice.

A St. Patrick’s Day cocktail wouldn’t be the same if it didn’t contain a little clover. For the simple syrup portion, I chose to use honey syrup, but you’ll want to find clover honey. Each petal of a four leaf clover represents a specific meaning in Irish culture. They represent faith, hope, love and of course luck. I use a 1:1 (honey:water) ratio when making my syrups, but if you want a little sweeter go for a 2:1 ratio. I infused sprigs of fresh rosemary into the honey syrup to accompany the mint I found in the whiskey.

So what does a hermit like me do on St. Patrick’s Day? Well, if I’m not a bartender, I usually mix up an Irish whiskey cocktail, a Guinness and watch Waking up Ned Devine. I also make a loaf of soda bread and a dark chocolate Guinness cake.

If the Hermit reaches your lips this St. Patrick’s Day…Sláinte! 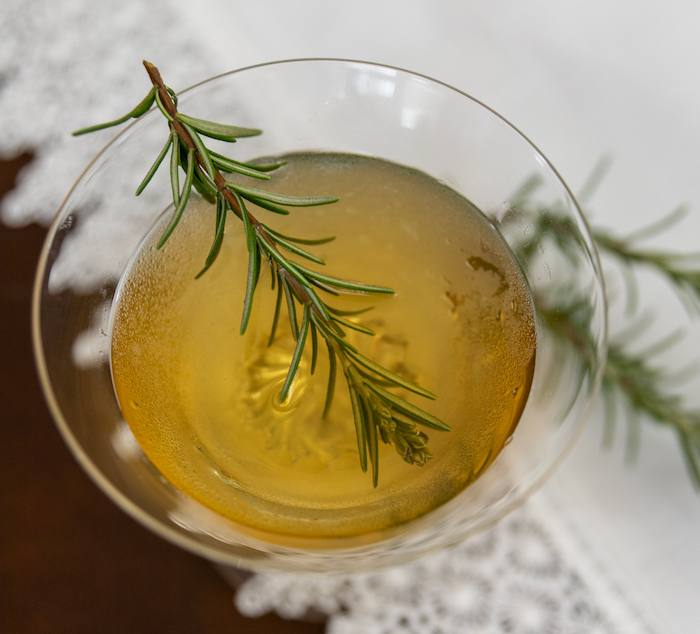 *In a medium saucepan, combine 1 part clover honey and 1 part water. Add a few sprigs of rosemary and stir until well blended. Filter into a sterile bottle or jar. Allow to cool before using for cocktails.

LiveWire Drinks recently announced the launch of its first bottled cocktail with famous bar industry icon Chris Patino, the Alley Cat Old Fashioned. The drink is made with two-year-old straight rye whiskey and apple brandy from Ventura Spirits, balanced with Bittercube cherry bark vanilla bitters. “There are few drinks in life better than a good […]

Developed in the 19th century and given its name in the 1880s, the Old Fashioned is a timeless classic. But did you know that this is the only cocktail that is believed to exist that bears his name, known as the whiskey glass? A whiskey glass is a short goblet often used to serve spirits, […]

US whiskey maker Woodford Reserve and home retailer Williams Sonoma recently formed a new partnership to bring unique whiskey cocktail experiences to kitchens and homes across the country. The partnership kicks off with a line of co-branded cocktail mixers, now available for purchase, in time to celebrate Bourbon Heritage Month. The line of cocktail mixers […]